When we talk about reference values in nerve ultrasound, we are talking about the upper limit normal of the cross-sectional area (CSA) of a nerve.

The CSA is the by far most widely used parameter in nerve ultrasound and its enlargement the by far most frequent morphologic expression of a pathologic condition of a nerve.

NOTE: in this article we focus on adults. Studies were usually carried out including participants aged 18 and up with the mean age of the study population between 40 and 50.

How do I measure the CSA?

To correctly measure the CSA you have to take care of two things: 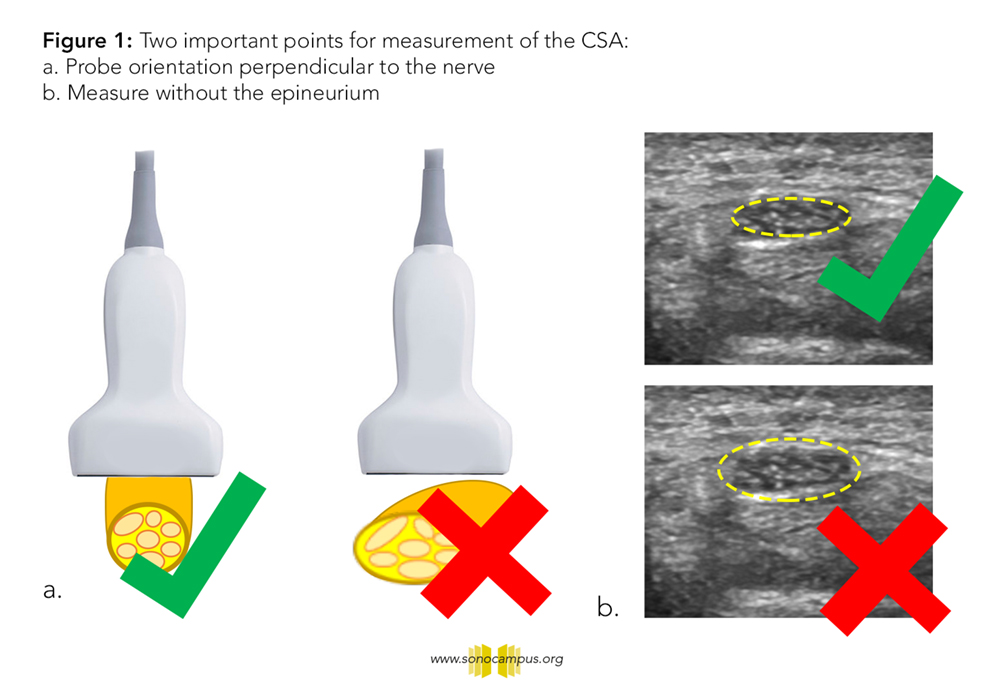 Factors that were checked for correlation with CSA are typically age, sex, height, weight and BMI. The first problem is that many of those interfere with each other, like BMI is calculated from height and weight and height is influenced by gender.

Among the 18 studies [1-18] we included here, 17 reported about correlations of CSA with various factors.

The important conclusion for you is: There may be some influence on the CSA by biological factors, but at the moment there is no recommendation or need to use different reference values for people of different height or weight, for example. On the contrary, concerning age it has been shown by Cartwright et al. [19] that CSA is positively correlated with age, but values do not become pathologically high and stay within usual reference values – with one exception of the ten sites checked.

If you are interested in the details – these can be found in Table 1.

How do I know if a CSA is pathologically enlarged?

There are basically two ways:

How do I get reference values?

The main recommendation: create your own reference values. Basically what you have to do is set up a cohort of healthy individuals and scan them on the sites you are interested in. It should at least be 10 people from each decade between 20 and 70 years of age. By including 5 males and 5 females per decade you also avoid the topic of influence of sex. Then you have the values of 50 people of both sides. Calculate a mean, calculate a standard deviation. Your mean plus 2x standard deviation is your upper limit normal.

This is a big task, no question. But believe us: it also helps you a lot to get better with nerve ultrasound. Once you have examined 50 people, your eye will be well trained in normal anatomy and you will benefit from that a lot.

The second possibility is to use reference values from literature. There are several studies out there focusing on the topic. For the purpose of this article we focused on those with the declared aim of providing reference values.

Table 2 gives you an overview on the nerves for which reference values were published until May 2019. We tried to include as many studies as possible, but cannot guarantee completeness. Most of the studies would give a mean plus standard deviation. We then calculated the upper limit normal as mean + 2x standard deviation.

With the upper limit normal, we created the pocketcard for you. You can download here.

However, the pocketcard can only be a good start for you and of course you can use it to reference suspicion of pathological alteration in your reports, but: if you compare reference values from literature (as you find in the table), you will soon realize that they are not free of problems, which we would like to point out to you and also explain how we tried to take these problems into account.

First and foremost: For most nerves for which more than one study was published, there is of course a certain range of the mean or calculated upper limit normal, e.g. the CSA of C5 was reported with an upper limit normal between 8 and 11 mm2 [4, 10, 16]. In that case, we report the 11mm2 on the pocketcard.

But there are some nerves in which published reference values vary over 100%, maybe the most extreme example being the tibial nerve in the popliteal fossa, which comes with an upper limit normal of 56 mm2 in one study [5] and 14 mm2 in another [11]. This may partly be explained by the exact site of measurement, as the study with the larger CSA states that measurement was done “right after splitting of the sciatic nerve”, where the tibial nerve exhibits a larger CSA than at the distal end of the popliteal fossa, just before diving between the heads of the gastrocnemius muscle, where it already gave off branches. But even this does not seem to fully explain the discrepancy.

On the pocketcard we provide you with the highest values that were reported and added a * which tells you about the discrepancy between studies. On the website you can check the details.

Use our pocketcard as a start, to get an idea, see how those values fit your own experiences and then set the next level by creating your own.

This website uses cookies to improve your experience while you navigate through the website. Out of these cookies, the cookies that are categorized as necessary are stored on your browser as they are essential for the working of basic functionalities of the website. We also use third-party cookies that help us analyze and understand how you use this website. These cookies will be stored in your browser only with your consent. You also have the option to opt-out of these cookies. But opting out of some of these cookies may have an effect on your browsing experience.
Necessary Always Enabled
Necessary cookies are absolutely essential for the website to function properly. This category only includes cookies that ensures basic functionalities and security features of the website. These cookies do not store any personal information.
Non-necessary
Any cookies that may not be particularly necessary for the website to function and is used specifically to collect user personal data via analytics, ads, other embedded contents are termed as non-necessary cookies. It is mandatory to procure user consent prior to running these cookies on your website.
SAVE & ACCEPT
Share This